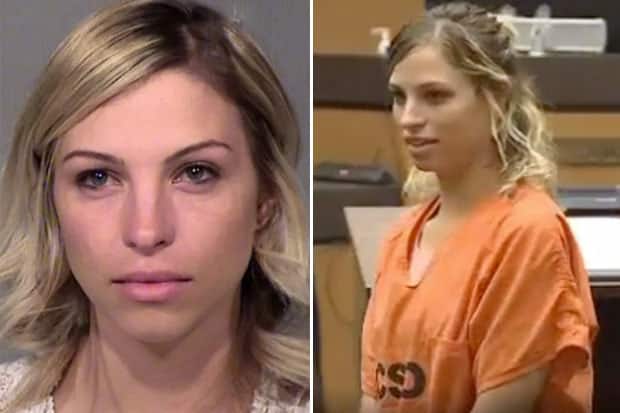 The news of an alleged illicit relationship between a Goodyear teacher and her 13-year-old student had previously raised many questions on the safety of teenagers in schools. Adding to those reservations, the new findings from the Government records has created another wave of surprise.

The controversial relationship has allegedly started with a message on a school app.

Las Brisas Academy elementary teacher Brittany Zamora asked her sixth-grade students to message her on an online instruction app called Class Craft as she was going to be bored at school one day.

But according to Police, a message from one male student quickly turned into flirting and then evolved into a sexual relationship between the then-27-year-old and her barely teenage pupil.

The new records give additional detail about Zamora’s alleged sexual misconduct with the student. Video, police interviews and Zamora’s arrest captured on body-worn cameras describe how Zamora and the boy had sex multiple times in her car and classroom — once with another male student in the room.

According to the records, the two even sexually touched each other while oblivious students watched a video.

It should be noted that Zamora was arrested in March 2018 on suspicion of sexual misconduct after a monitoring app on the boy’s cell phone alerted his parents to illicit texts between the two.

Zamora, now 28, had already surrendered her state teaching certificate in December. As per the court records, she continues to be held in a Maricopa County jail on a $250,000 bond.

In an interview with the Police officials, the 13-year-old boy told he couldn’t remember how their conversations evolved from student-teacher conversations to flirting and, eventually, exchanging I-love-yous.

He told the interviewer that they frequently talked about what they wanted to do to each other.

“She said she wanted to give me a blow job and my stuff is really big and stuff like that,” he recounted to the interviewer in his prepubescent voice.

She even pushed him to clarify what exactly “stuff” meant. He hesitated before saying, practically in a whisper, the word “penis.”

She pushed him to clarify what exactly “stuff” meant. He hesitated before saying, practically in a whisper, the word “penis.”

However, he remembered their first kiss. He was saying goodbye to her after class one day while everyone was in a parent-teacher meeting. In her brightly-colored sixth-grade classroom, Zamora allegedly grabbed his shirt, pulled him in for a hug and kissed him.

The classroom kiss eventually escalated into full-on sexual conduct during the class time, he said. They would touch each other sexually in the back of the room while other students watched videos.

Other times, the boy told the interviewer, Zamora “touched his stuff” at her desk as she pretended to look for something in a drawer. Students were working on a project just a few feet away.

He also had sent her notes on brightly colored sticky notes in class. According to the photos provided by police show some of the notes scrawled in his childish handwriting were obscene; others were closer to love letters.

She had allegedly sent him a naked picture of herself and another of herself wearing lingerie. He told police he also sent her pictures of himself naked.

This went on for weeks, he said. It had not escalated the past until the two nights the boy was staying at his grandparents’ house. She texted him asking if she could come over to show how much she loved him. Her husband was gone fishing.

The teen also told the interviewer how he snuck out of the house after midnight to meet Zamora in her dark red Mazda parked on the other end of the street. They allegedly kissed and performed oral sex on each other before her husband called saying he was about to come home.

She returned the next night. He said they had sex briefly before her husband called and she left.

The teacher told him not to tell anyone. He told a classmate secretly anyway.

As per a friend of the victim, one day, the boys were supposed to stay later after school to help prepare for a talent show; instead she kept them in the room and began kissing the victim. She asked the friend to stay and make sure no one saw as they had sex in the classroom.

The friend struggled to describe what was happening to the interviewer. “They were just doing it,” the friend said. “It was very uncomfortable.”

The next day, they again asked the friend to stand watch. He refused and left. He told the interviewer the victim confided to him that he had sex with Zamora again.

Zamora had never attempted to assault the friend; he told the police. As per him, she did ask him if he was circumcised and showed him pictures on her phone when he didn’t understand the question. However, the conversation stopped because it was time for recess.

Victim’s friend recounted to police how rumors circulated about Zamora and the student in January 2018, months before her arrest. As per students, they were too close. Some even insisted he had gotten her pregnant.

It is not clear yet whether any other students saw the sexual activities that occurred during class.

As per the lawsuit filed by the parents, last month three students told Las Brisas Principal Timothy Dickey they believed Zamora was in a relationship with the student. Dickey instead warned the students about the dangers of rumors, according to the lawsuit.

After Dickey’s lecture, Zamora apparently went into his office “frantic and crying,” according to the lawsuit, and the principal believed her panic was because he talked to her students.

The boy’s parents never were called.

Zamora was arrested that same day the allegation surfaced. As per the records, Goodyear police pulled her over while she was driving and handcuffed her on the side of the road.

Before being taken to a holding cell, Zamora asked if she could call her husband to let him know where she was. The investigator told her he already knew.

“I have the best husband in the world …” Zamora said to the investigator before trailing off.

However, Zamora has pleaded not guilty to multiple charges, including molesting a child and sexual conduct with a minor. She has been scheduled to appear in court in May for a status conference on the case.