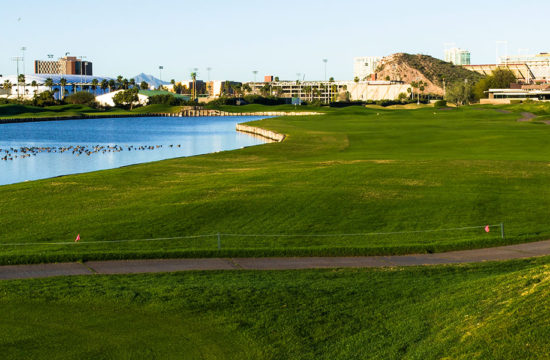 Arizona’s long-planned closure of Karsten Golf Course will finally take place in May. The closure will be with the first development on the property to be multi-purpose fields for student and athletic use.

The 18-hole Golf course was designed by Pete Dye and was being operated since 1989. It is part of the 330-acre ASU athletic facilities district, created in 2010 by the Arizona Legislature. It is now called the Novus Innovation Corridor and being master planned by ASU and Catellus Development Corporation.

The ASU golf teams have been moved to the Papago Golf Course, allowing for development to begin on the Karsten course. It should be reported here that in 2014, ASU signed a 30-year agreement with the city of Phoenix to manage the Papago course and last year completed construction of The Thunderbirds Golf Complex practice facility.

Since 2015, Papago Golf Course and Phoenix Municipal Stadium have been home to ASU. It is located within five miles of ASU’s Tempe campus.

ASU is also planning some commemorative events around Karsten’s closure. It includes a final round golf outing and dinner for those who helped to create the course. The Heather Farr statue on the 10th hole at Karsten now is at Papago, and it will stand next to a wall with the history of Karsten. The 52nd Street entrance to Papago is renamed Karsten Way. A new entrance off McDowell Road allows more direct access to Papago and includes an adjacent walking trail.

ASU memorabilia in the Karsten dining room, including NCAA championship trophies, will be moved to Papago or the Sun Devil Athletic Hall of Fame at the Carson Center.

“We’ve been privileged to be associated with the ASU Karsten Golf Course for the last 30 years,” said John A. Solheim, PING chairman/CEO and son of Karsten Solheim, the course’s namesake. “Together with some of the other contributors, including Solly Sollenberger, Bob, and Karen Hobbs and Keith Turley, our family wanted to help provide the ASU men’s and women’s golf teams a premier facility to attract top collegiate players.

“That goal was far exceeded as both programs have prospered and continued to produce some of the greatest players in the game. While we’re saddened the course will no longer be enjoyed by golfers from around the world, it remains important to Karsten’s legacy, and we’re excited to be part of ASU’s commitment to the amazing new facility at Papago. They’ve done an incredible job with The Thunderbirds Golf Complex that will elevate the ASU golf programs even higher.”

The new athletic fields, including one at the corner of Rural Road and Sixth Street that will be moved, will be built east of Sun Devil Soccer Stadium on what formerly was a Karsten hole 1-4. They will be situated in an area known as Athletics Village that currently includes Dickey Dome, soccer/softball stadiums and basketball, wrestling and gymnastics practice facilities and band field.

The Novus Corridor master plan consists of eventually moving the Sun Angel Track Stadium and Whiteman Tennis Center from the west side of Rural Road into the Athletics Village area.

There are also long-term plans for ASU football to practice adjacent to its new home at the north end of Sun Devil Stadium, where a fieldhouse is proposed to replace the Dickey Dome. Packard Stadium, ASU’s baseball home from 1974-2014, at some point will be torn down with that property included in the Novus Corridor development.

ASU and Catellus are likely to maintain and secure the Karsten property with plans for berming and landscaping along Rio Salado Parkway and McClintock Drive.

As per the plan, Hobbs House, the former practice facility for the golf teams, might be remodeled for use by other athletic teams.

It should be noted that ASU has won eight NCAA women’s golf titles, most recently in 2017, and two men’s crowns. NCAA Championships for men and women is scheduled to be held at Grayhawk Golf Club in Scottsdale from 2020-22.