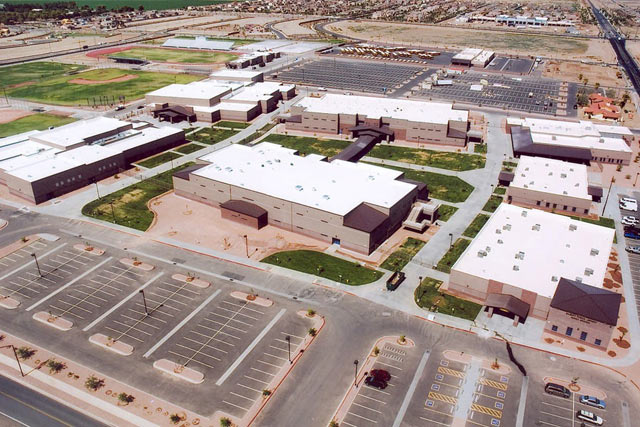 The response has been sent to parents from the school’s principal, Dan Serrano. Perry High School is located in Gilbert, but part of the Chandler Unified School District.

“I am writing to clear up misinformation circulating on social media and media, specifically that students have been disciplined for expressing their political viewpoints or wearing political attire. This is false,” Serrano said.

As per Serrano, students were carrying political signs that caused a disruption and created a safety concern Friday at lunch. The students at first complied when asked to put the signage away.

As per the principal, the trouble began after school ended, when the students brought out the signs again.

“When the school’s resource officer asked the students to leave campus, they declined. They also refused to respond to my request to provide their names and school identification when I sought to interview them,” Serrano said.

According to Serrano, the information circulating about student discipline is false, but the district cannot set the record straight because of “federal privacy laws relating to disclosure of student information.”

Parents told the reporters on Friday that their students went to school wearing pro-Trump gear because the day had been designated a spirit day with a ”Party in the USA” theme.

As per Heidi Jones, her freshman daughter, Logan, was suspended for ten days after refusing to give her name to school authorities.

“She came here today to support America, which is what your Spirit Day is all about. And now that she has refused to give her name, you’re suspending her after she’s complied with everything else?” Jones said.

As per Jennifer Farris, another mom with a student in the group, assistant principals were among those asking the students to remove the Trump attire.

She said she was told officials considered the clothing “offensive, and that the kids were being disrespectful by wearing it” and could face sanctions if they didn’t comply.

Farris gave a video which shows an interaction she had with Serrano on Friday.

“You’re going to ask my daughter to leave school because she was wearing a ‘Make America Great Again’ sweatshirt?” Farris asked Serrano in the video.

“Nope. That’s not what happened,” he responded.

Farris then asked why a flag would not be allowed on campus, referencing the ‘Trump’ flag the students had carried.

“She’s not the one that had the Trump flag,” Farris said, referring to her daughter. “And even if she did, why can’t she have a flag on America day for school that says Make America Great Again?

Serrano responded in the same video.

“To carry a flag around is not a good use of the flag, it’s disrespectful,” Serrano responded.

When asked to respond, a spokesman for Chandler Unified School District clarified that the issue with the flag ”was related to the interactions it was causing, not that carrying a flag in itself was disrespectful.”

As per the statement, sent to parents, Serrano said the school did not punish anyone over political viewpoints.

“In summary, our administration has not and will not discipline a student for lawfully exercising their free speech rights,” he said.

“I’m sure he’s worried the censorship on the students is going to fall back on him, so he’s trying to cover his tracks,” Farris said. “They don’t want to admit they are punishing students and their parents for their beliefs.”

She also added the students didn’t refuse to give their names. But she added that they were waiting until their parents arrived first.

Serrano in his letter described that it is the school’s responsibility to maintain a safe campus and make sure there are “no disruptions to the educational environment.”

“Students or visitors who refuse to comply with administration and law enforcement may be asked to leave the campus when the administration deems it in the best interest of safety, security and effective school operations,” Serrano said.