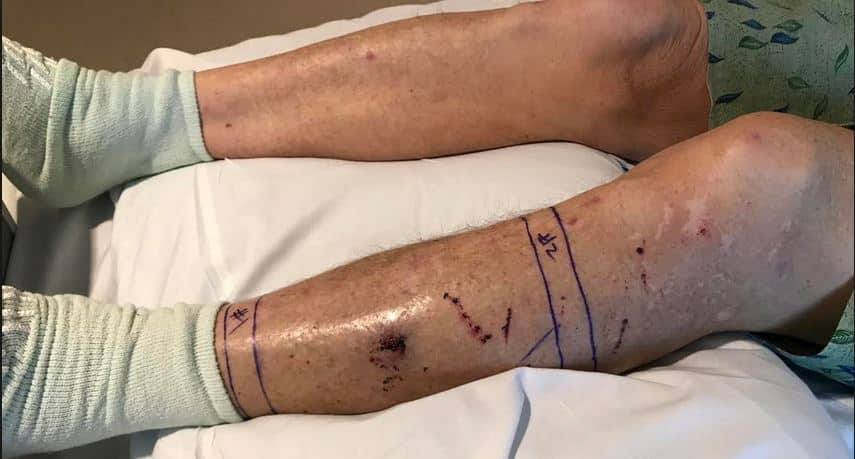 Jim Watkins was on a bike trip along with his friend on the Apache Wash trail in northern Phoenix on Wednesday afternoon when he fell off his bike and into a bush.

Though the fall was not that bad, it was unfortunate that he eventually faced a rattlesnake and he got bitten.

Watkins, 75, was biking up a steep part of the trail about 3:45 p.m., when he lost momentum and fell beside the trail, he said while discussing the ordeal Thursday from a hospital where he was being treated.

“It felt like a bee sting. And then as I looked down, I could see the snake was recoiling back up, but still vibrating his rattles. And so I pulled away,” Watkins said.

Watkins was bitten on his left calf. He then rode with his friend for 30 minutes to get back to the trailhead. His friend called poison control right away to seek advice.

“Once I got in the truck, I got poison control on the speaker phone and started talking with them. And they said, ‘This is serious, you need to go to an emergency room,'” Watkins said.

Watkins was later admitted to Banner University Medical Center and was assessed once he arrived.

Watkins reportedly has received three treatments of anti-venom — 12 vials in all — that counteracted the snake’s venom and reduced the swelling.

“Most Arizona emergency departments and hospitals have anti-venom. But there’s only a couple of hospitals that have medical toxicologists that specialize in this care,” said Dr. Daniel Brooks, medical director of Banner’s Poison and Drug Information Center.

As per Brooks’ advice, anyone who gets bit by a rattlesnake should get anti-venom as soon as possible. Walking, running and riding a mountain bike all increase blood circulation and it can put one at the risk of secondary injuries, Brooks added.

“Wherever the bite is, is where most of the damage is going to occur. And that means the breakdown of muscle and skin, as well as a lot of edema and swelling,” Brooks said.

According to him, the most important factor when being bit by a rattlesnake is to consider how much venom is injected.

It should be noted that as the Valley warms up, rattlesnakes are out on the hiking trails. Brooks gives this advice to anyone planning on hiking:

“In the warm deserts, rattlesnakes are most active from March through October. In the spring, they are active during daylight hours. As days become increasingly hot around early May, rattlesnakes become more active at night and spend the day in a spot of shade or a cool shelter,” according to the Arizona Game and Fish Department.