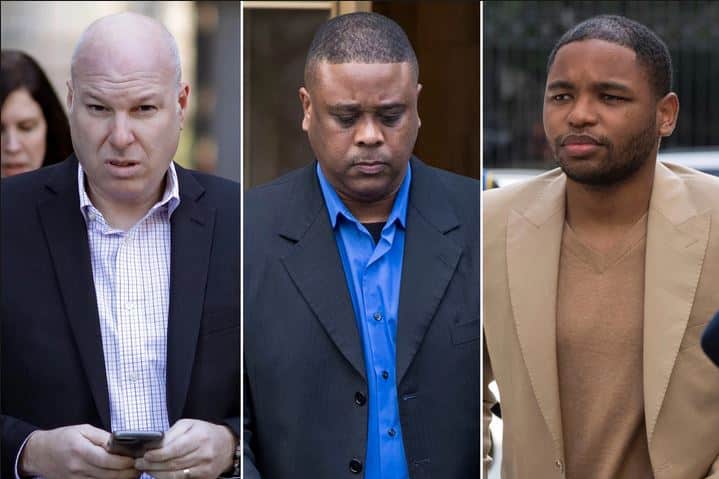 As one college basketball trial concluded Tuesday with the three defendants being sentenced to prison of less than a year and another trial slated for April and potentially featuring Arizona coach Sean Miller as a star witness, one defense attorney promises it to be a “street fight.”

Judge Lewis A. Kaplan sentenced former Adidas executive Jim Gatto to nine months in a minimum security prison, while former Adidas consultant Merl Code and would-be sports agent Christian Dawkins were sentenced to six months apiece during sentencing in the Daniel Patrick Moynihan U.S. Courthouse. All of the three were convicted in October of seven combined counts of wire fraud and conspiracy to commit wire fraud by paying families of coveted basketball prospects to get them to commit to programs sponsored by Adidas. Dawkins and Code each have to pay $28,261 in restitution to Louisville, while the restitution payment for Gatto is yet to be determined.

All of them are scheduled to appeal on the higher court and will not be serving any jail time during the appeal, which could take a year or more.

At the time of comments to Kaplan, Gatto, 48, broke out in tears and said he was “very scared about the prospect of going to prison.” He was accompanied by his wife, Rachel, son Jack, 17, and daughter Grace, 14, sat in the front row with pained looks on their faces.

Later Dawkins, 26, said, “I realize now more than ever that none of this was worth it. In my quest to get ahead I broke the rules and made some really bad decisions. No one forced me to do either.”

As per the judge, the sentencing recommendations were meant to send a “great big warning light to the basketball world” and argued that there was a “need for deterrence here.”

Three of the four college basketball coaches were involved in the federal investigation, including Arizona’s Emanuel “Book” Richardson, have taken plea agreements rather than face trial. The fourth, Auburn assistant, Chuck Person, is scheduled for a June trial.

Gatto and Dawkins allegedly worked to funnel $100,000 in Adidas money to Brian Bowen Sr. in exchange for his son, a 6-foot-7-inch, five-star prospect known as “Tugs,” to commit to Louisville.

The scandal along with past issues led Louisville officials to fire athletic director Tom Jurich and basketball coach Rick Pitino. It should be noted that Pitino is now coaching in Greece, while “Tugs” Bowen is playing professionally in Australia.

As per prosecutors’ description, a scheme in which the three men worked together to pay Brian Bowen Sr., something that violated both federal law and NCAA rules, in exchange for “Tugs” Bowen’s commitment to the Adidas-sponsored school. Prosecutors said the money was funneled through an amateur team affiliated with Code and a corporation controlled by Dawkins. Gatto produced invoices to Adidas, which reimbursed him with money used to fund the scheme.

Kaplan said Gatto, Code and Dawkins “knew what they did was wrong.”

Kaplan said the “most seriously injured victim of the Louisville scheme was ‘Tugs’ Bowen. … He never got an opportunity to play basketball in the NBA. I’m sure Australia is a great country, but it’s not the life he wanted. These three defendants participated in wrecking ‘Tugs’ Bowen’s life.”

On April 22, Dawkins and Code are due to go back to trial on the charges of bribery. Arizona’s Miller and LSU coach Will Wade have been notified that they would be subpoenaed for that trial. Miller has declined the request to give any comment.

Haney, Dawkins’ attorney, promised both a “street fight” and a “fact-heavy trial.” The coaches have been subpoenaed by Dawkins and Haney as defense witnesses. On the number of coaches to take the stand, Haney said, “As many as I can get in the courtroom. In the second trial, we’re going to pull back the curtain.” It should be noted that none of the players or coaches testified in the first trial. Haney said, “We’re going to go all the way with (a trial).”

Richardson, the former UA assistant, is scheduled to be sentenced next month after pleading guilty to one count of federal funds bribery. He might be serving a sentence of between 18 to 24 months in prison as per his charges. Richardson agreed in January not to appeal any prison sentence of two years or less, according to the plea agreement, and he would pay back $20,000. Craig Mordock, Richardson’s New Orleans-based attorney, said he would no longer have to cooperate with federal authorities under the terms of the deal.

Mordock denied that Tuesday’s judgment would have any impacts on Richardson’s sentence. He texted, “Different judge, different charge.”

As per Haney, the defense’s argument throughout October’s trial was that his clients were simply doing what Adidas and coaches at Louisville, Kansas, and N.C. State wanted them to do.

“When we look back in 20 years, we’re going to ask, ‘Why weren’t college basketball players paid?’” Haney said. “This could transform college basketball and put the players in a situation where they’re paid enough money that their families can go watch them play.”

He added that the second trial might trigger a “transformative process … and that’s why we’re going to continue to fight.”