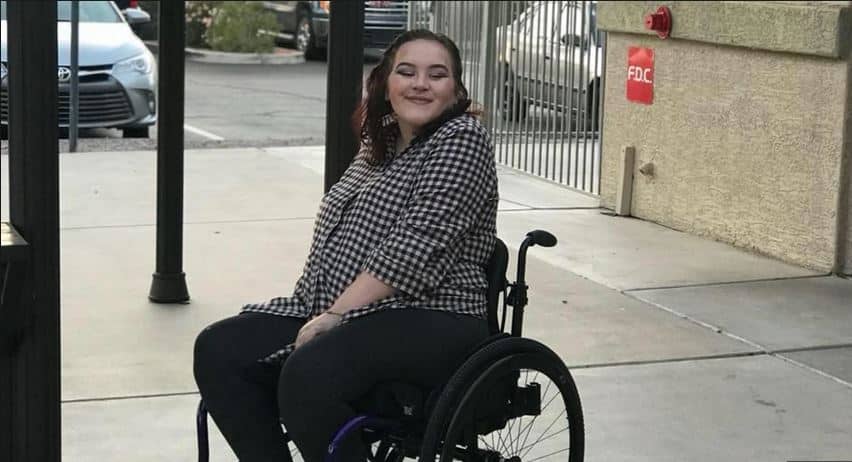 In a tragic turn of events, a 19-year-old woman whose wheelchair was stolen in Tempe on Friday is asking the thieves to consider the importance of the wheelchair for her and return it immediately.

The wheelchair was allegedly stolen while Josephine Siegel was completing a driving test at a facility that helps people with disabilities assess the equipment they need to drive and earn their licenses.

Her driving instructor told her the wheelchair would be fine outside Driving to Independence near Priest Drive and Broadway Road because they would not be gone for long, she said.

As per Siegel, they left for about 15 minutes before returning to discover the chair had been taken.

It should be reported that Siegel had become paraplegic from a car accident two years ago. She said she had a panic attack in the vehicle because she could not leave.

“It’s like taking away my legs,” she said. “I was stuck. I couldn’t get out of the car, and I couldn’t move, I couldn’t stand or take a breather.”

As she moved into the car, others looked for the chair. A nearby Motel 6 had surveillance footage that showed two women taking the wheelchair apart and putting it in their vehicle, Siegel said.

As per her, Police is yet to release the video to the public, and the hotel would not release the footage because of liability concerns.

As per Tempe Police, a report was filed about the incident but could not offer details on surveillance footage.

However, the company that manufactured Siegel’s wheelchair loaned her one temporarily. Though it helped her to get out of the car, it was a basic design that was too large to fit inside the doorways in her home.

However, another company later provided Siegel with a wheelchair that would fit through the doorways.

Though she showed her gratitude to people, who dropped everything to help her get a replacement, she said it doesn’t feel like her custom chair.

As per Siegel, she has suffered from skin issues since using the new chair because it is too small for her and her blood doesn’t circulate properly.

Apart from the comfort of her own chair, Siegel and her mother said it also carries memories that can never be replaced.

“We’re praying her chair comes back because it’s the chair she graduated in, the chair she got her diploma in, the chair she turned 18 in,” said Amy Siegel. “It has a lot of sentimental value, and someone’s going to part it out. There’s no dollar amount you can put on a person’s wheelchair.”

Amy Siegel said the expenditure for a new wheelchair could be $7,000 or more and take months to determine the correct measurements and materials. She now worries insurance might not pitch in because the theft occurred on private property.

“You don’t think somebody’s going to steal your wheelchair. It’s just something no one would ever be prepared for,” she said. “We don’t have an extra $8,000 sitting in the garage.”

“It’s not so much shaming them or making them feel any kind of way; it’s just — bring back what’s not yours,” she said. “It’s my life; it’s my comfort zone; it’s what gives me my independence. It’s not important to anyone else, but to me, that’s everything.”

She also had started a GoFundMe page and already received around $1300 by Sunday evening.