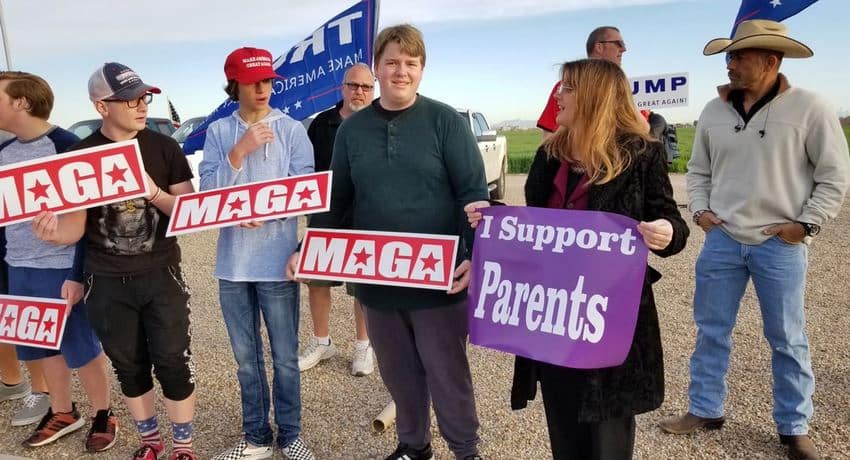 The recent controversy of Perry High School students carrying a President Donald Trump banner with “Make America Great Again” attire creates a massive uproar amongst the parents stating politicization of educational institutions. As per a spokesperson for the Chandler Unified School District, students were told to put away the flag but never were told to change attire.

However, the two separate versions of the incidents force us to emphasize the bigger question here about the fundamental rights of school students. And as per the Constitution, one thing is clear that Students do not “shed their constitutional rights to freedom of speech or expression at the schoolhouse gate.”

This is not a case which has happened for the first time in the United States. This was cleared by the U.S. Supreme Court in the landmark Tinker vs. Des Moines ruling 50 years ago. The ruling acknowledged limits if the speech disrupts school, creates disorder or invades the rights of others.

As per some protesting parents, the students were merely supporting the president. But as per some, the MAGA campaign which got famous by President Trump has a racial undertone. These all turn of events spark questions on First Amendment rights in schools.

As there are precedents in courts like Tinker, the Chandler Unified district does not ban political signage in schools. However, the district policy bans “offensive” clothing and items that “interfere with school work, create disorder, or disrupt the educational program.”

This is the reason administrators say they asked students to put away a Trump banner on Friday. As per a statement made by the district, students were asked to put away the flag after a verbal altercation between students during lunch. School Principal Dan Serrano has already confirmed that the administrator’s actions were not about stifling political viewpoints but about maintaining a safe campus.

Bans of this kind have happened before in metro Phoenix. For example, a Buckeye Union High School student was banned from wearing a Black Lives Matter shirt in 2016.

Political free speech has been one of the most important types of fundamental rights conferred to American citizens, including students.

“Students have the right to express themselves, unless the school can establish that they were disrupting the environment,” according to Lata Nott, executive director of the First Amendment Center in Washington, D.C.

She stated a 2006 case as an example, Harper v. Poway Unified School District. The case was about a student who wore T-shirts with anti-gay messages to school and was asked to turn his shirts inside out.

“The rationale for that is that it’s invading the rights of other students,” Nott said. “When it’s a direct attack on a student, it’s disruptive to someone else’s ability to learn.”

Nott stated that the proportionality of the punishment is important, as the student was not suspended or expelled, just asked to turn his shirt inside out. In another case happened in Chandler, one student was suspended.

However, as per Serrano, students put away the Trump banner when asked during lunch but brought out the sign again after school ended.

“When the school’s resource officer asked the students to leave campus, they declined. They also refused to respond to my request to provide their names and school identification when I sought to interview them,” Serrano said.

As per some students, wearing MAGA gear is seen as a show of conservatism and support for Trump. Perry sophomore Steven Blackledge, 16, said as a conservative student, he believes he is sometimes targeted by students and teachers. He had attended the protest in support of students’ right to free speech Monday. His classmate Sam Wurst also was at the protest to rally behind the president said the school district supports Trump’s policies as he is the President.

“Whether they like it or not, he’s our president, and I support him, and he supports what I believe in,” he said.

Rep. Kelly Townsend, R-Mesa, was also at the protest. She asked why the district was prohibiting pro-Trump gear but not applying the rules to other political groups.

”If we’re going to take issue with students wearing Trump attire, then why aren’t we taking issue with the Wednesday RedForEd attire?” Townsend said, referencing the red worn to support teachers.

But one local leader said that the MAGA slogan had been adopted by far-right supporters of the president. Roy Tatem, president of the East Valley NAACP, said in the 2016 election cycle and even now, the slogan serves to counter Barack Obama’s administration, and it has the racial undertone as the slogan is still against what Obama represented as the county’s first African-American president.

“A large majority of those embracing the slogan of Make American Great Again are embracing this new age or revitalized white supremacist political doctrine,” he said. “To many of us in the African American community and to the NAACP, we look at those chanting or embracing Make America Great Again pretty much as a racist dog whistle.”

However, Tatem said he was unaware of the intention of the students wearing, but it could be taken as harassing to others who view the slogan differently.

“While it’s not illegal for someone to wear the hat or chant the slogan, and yes, people do have their right to freedom of speech and I believe in that, it can create a hostile environment knowing what it also represents,” he said.