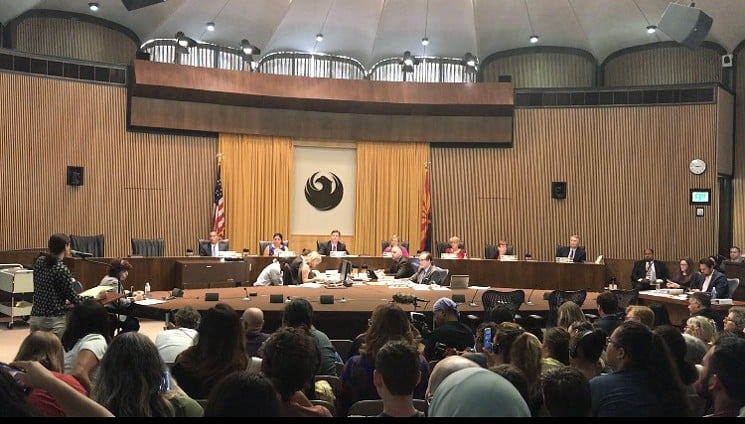 Phoenix City has released the final unverified election results on last Friday. The result would receive the official status once it gets the approval of the Council. It is expected that the run-off election for two open seats will be contested by four Phoenix City Council hopefuls on May 21st. Former council members Kate Gallego and Daniel Valenzuela resigned last year with an aim of contesting for Mayor last year. It is to be noted that Gallego won the mayoral elections.

This is Daniel Valenzuela’s former constituency. It covers most part of the Western Phoenix that includes Maryvale and Villa de Paz. The demography here is mostly filled with Latinos of mid-to-low-income range.

The seat’s tenure will be till April 19, 2021. As per the results declared by the City, the vote percentage goes like this-

Betty Guardado and Vania Guevara are the two vote-getters to be advanced for the final voting. It should be noted that Guardado is the director of organizing and vice president of Unite Here Local 11 and Unite Here International, labor unions which represents hospitality workers.

She also serves as a board member of Central Arizonans for a Sustainable Economy and Arizona AFL-CIO. She is currently an interim council member since August.

She had worked in Valenzuela’s council office from 2012-2017. There in the office, she looked after community initiatives, developed community partnerships and interacted with constituents of District 5.

She had graduated from Arizona Summit Law School, and also serves as a board member at the Maryvale Family YMCA and a member of the Hispanic Bar Association and Latina Mentoring Project.

District 8 is Gallego’s former district. It includes parts of downtown, south Phoenix and Laveen.  The demography here is predominated by African Americans. The seat will have a tenure till April 17, 2023. The vote percentage goes like this-

The two at the highest voting percentage ultimately advanced to the final poll are Carlos Garcia and Mike Johnson. Garcia serves as the director of Puente Arizona, a grassroots migrant justice organization. He is popular for raising issues in immigrant rights in the local community. His effort gained national attention through opposition to immigration law Senate Bill 1070. He had acquaintances like former Sheriff Joe Arpaio in support of his actions.

He had also opposed the proposed south Phoenix light rail extension and organize the “4 lanes or no train” group.

Johnson had served as a councilman from 2002-2013 in District 8. He is an ex-detective in the Phoenix police department. He co-founded Johnson-Neely Public Strategies and served on the Arizona Board of Executive Clemency. He is also a member of many local organizations like St. Luke’s Medical Center Board, Maricopa County Planning and Zoning Commission, National Forum of Black Public Administrators and the Greater Phoenix Urban League.