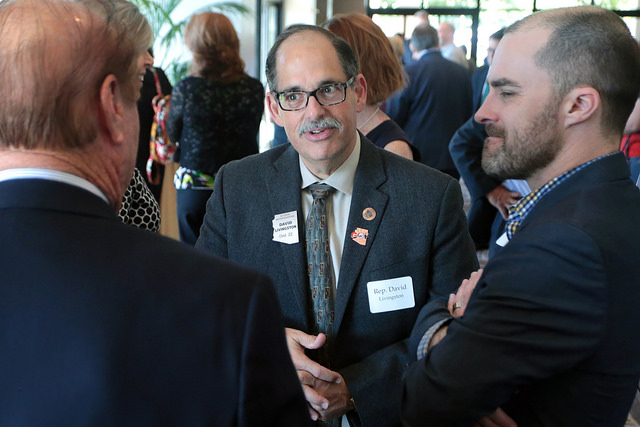 The much controversial DNA bill which would require the State to record DNA samples for a database has been passed an Arizona Senate committee Wednesday after being stripped practically beyond recognition.

The third version of the Senate Bill 1475 which has been taken effect in the last 72 hours now focuses specifically on testing samples obtained via a rape kit using Rapid DNA technology. But it appears to benefit a single company that provides the technology to the state.

Sen. David Livingston, R-Peoria, introduced the original bill, decided to hear it in the Senate Transportation and Public Safety Committee he chairs, and then — as opposition to the bill exploded — amended the bill twice.

The new version was pushed forward right before the public committee hearing. Livingston offered it as an even more limited-scope alternative to the second version of the bill, which zeroed in on employees at intermediate health care facilities.

The amendment removed entirely the previously-proposed creation of a new DNA database and instead focused on expediting the testing of rape kits. The samples will likely to be checked against the current database, which includes anyone convicted of a felony, a misdemeanor sex crime, exploitation of a child or “other serious or dangerous offenses.”

The new bill also dropped the $250 fee that was to be paid by anyone submitting a sample.

The passage of the bill could revamp investigations by identifying a rapist within only a few hours of a sexual assault. It should be noted that investigators used Rapid DNA testing in the Hacienda case and the suspect was arrested the same day his DNA was taken.

Bill to Benefit One Company-

As of now, the State Crime Lab already tests sexual assault kits. It is still not clear how long it currently takes or how often they already use the Rapid DNA instrument over traditional testing methods.

As per the bill, the Department of Public Safety must use Rapid DNA technology. Rapid DNA instruments from companies ANDE and Thermo Fisher Scientific are already used at the crime lab, according to a DPS spokesman. These are the only companies that manufacture the instruments in Arizona.

The bill also states the need that the instrument must be certified by the FBI. James Davis, a former FBI agent, and representative for ANDE told the Senate committee that only ANDE has that certification.

However, no information was provided during the committee hearing about how much the bill would cost DPS to implement.

Many committee members were concerned that this would give ANDE a monopoly with the state.

It is still not known whether the results from a Rapid DNA system would even be admissible in court. Davis said that they did not know because every case so far had ended with the defendant pleading guilty before the case went to trial.

Sen. Lupe Contreras, D-Avondale, described the bill even in the new form as a “stepping stone into madness.” He said he was shocked that Livingston was even considering the bill.

As per Livingston, he has discussed the bill with attorneys, police chiefs and others, but no law enforcement personnel or victims’ advocates spoke during the hearing. It’s not clear which law enforcement and advocacy groups support the new bill after its new version sets in.

As of now, only ANDE’s representatives spoke in favor of the bill.

The committee, however, approved the re-vamped rape kit testing bill 5-3 with Otondo, Contreras and Sen. Jamescita Peshlakai, D-Window Rock, voting against it. It now advances to the full Senate for consideration.

Livingston explained that the first bill was brought to him following the scandal at Hacienda HealthCare, where an incapacitated patient was raped and impregnated.

“That bill got my attention,” he said. “Why did it get my attention? Sexual assault. Abuse. Rape. Unacceptable. This body needs to do something about it.”

It should be noted that anyone can write a proposed bill, only a state lawmaker can formally introduce it.

However, Livingston admitted the original versions of the bill were too broad and intrusive. The initial bill would have required anyone who needs fingerprint clearance from the state — health care workers, teachers, school volunteers, foster parents, realtors, etc. — to submit their DNA to the state.

As per the bill, DPS would have maintained the collected DNA alongside the person’s name, Social Security number, date of birth and last known address. Plus, applicants would have to pay a $250 fee.

It should be reported here that after a huge outcry, Livingston proposed an amendment to narrow the bill to collect DNA only from an individual who “provides direct care” in a nursing care facility for individuals with intellectual disabilities.