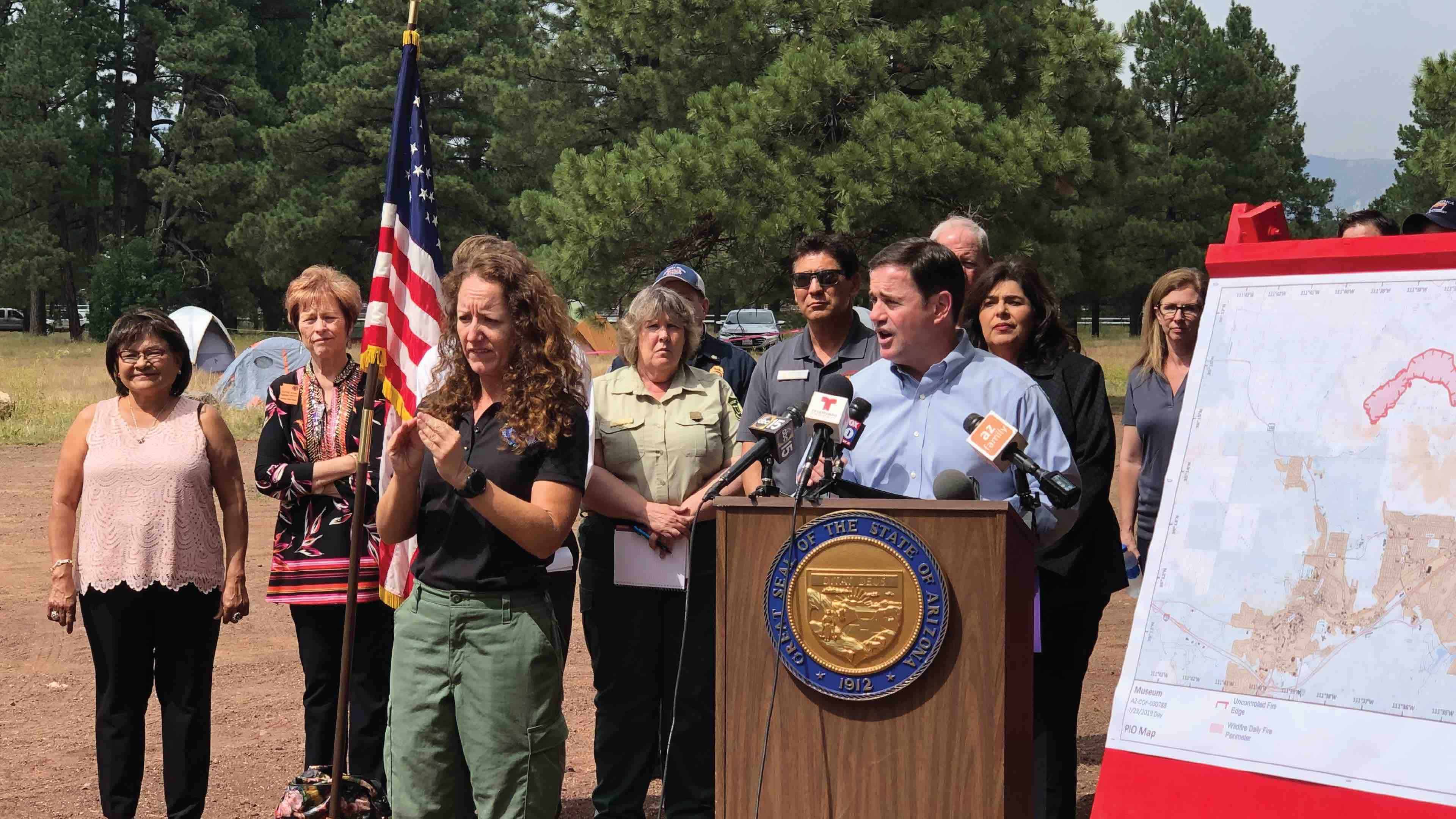 The Museum Fire that started on Sunday, 21st July, miles away from Flagstaff continues to grow and on Tuesday, Governor of Arizona Doug Ducey declared emergency in the Coconino County.

“I want you to rest assured that the state of Arizona is doing everything possible we can to make sure that the people fighting this fire have everything they need.”

The Arizona governor on 23rd July visited the Flagstaff to survey the region and in the afternoon carried a news briefing on Museum fire.

Gov. Ducey informed that the Museum Fire has become a challenging fire until now, and the threat is real.

The emergency declaration assures that the first attendees will have the needed facilities to safeguard their lives, pets, and Arizonan’s property.

Until Tuesday, the Museum Fire had grown to 1,800 acres and was not contained.

“Public safety is our top priority, and this declaration will ensure emergency officials have the resources they need to continue protecting people, pets and property.”

Gov. Ducey further said I am thankful for the early responders who are struggling against the Museum Fire we talked today. We are praying for the firefighter’s safety across the front lines and the citizens impacted by the Museum Fire.

Gov. Ducey also outlined the work related to fire fighting. He mentioned around 500 firefighters are on the scene, 11 hotshot crews, air tankers, numerous helicopters, and more.

The emergency declaration will offer around $200,000 from Arizona’s general fund, the fund will be utilized by the Arizona Division of Emergency Management’s Director, as per a press statement from Ducey’s administration.

Rich Nieto, Incident Commander, mentioned that no structural damage has been reported or any damage caused by the Museum Fire.

He added, it mentions more about the wonderful work that is being carried out across the area.

On Tuesday evening, the incident management team gave the update on the Museum Fire; the fire has burned 1,400 acres and only 10 percent contained. However, smoke and climate conditions made it tough to get accurate data, the update stated.

Spokesman of the Incident Management team, Steve Kliest informed a radio source that rain has supported containment, but this might warn more of a local flood.

Convenient climate conditions have enabled crew members to perform burnout activities across the north edge of the blaze on the day.

The burnout activities might grow noticeable smoke in the region, the update mentioned.

Fire officials believe the fire is caused by human but failed to reveal the exact cause for the spark.

The Forest Service mentions that they are hoping for additional rain to assist the crew’s battle against the blaze.